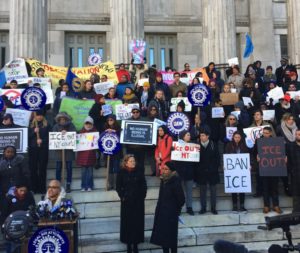 On a frigid Thursday afternoon hundreds of attorneys and community groups rallied at the steps of Brooklyn Borough Hall against recent arrests of immigrants within New York State Courts. The rally demanded that the Office of Court Administration prevent court officers from collaborating with ICE while also calling attention to the arrests’ chilling effect on access to justice for all immigrants.