CMS and QHC are Victorious in Willets Point

On Wednesday October 30th CMS and the Queens Housing Coalition gathered at St. Sebastian Parish in Woodside, Queens in order to celebrate their achievements in the final plan for the redevelopment of Willets Point, Queens. 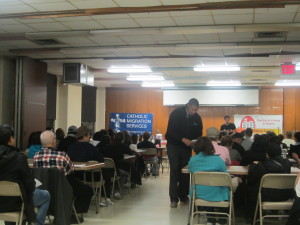 The redevelopment of Willets Point has been on the city council agenda since 2008. On Wednesday October 9th the City Council voted to approve the 3 billion dollar Willets Points redevelopment plan. The 43-3-1 vote gave the developing companies Sterling Equities and Related Cos. the go-ahead to move forward with their redevelopment plans which will include a mega mall. According to the terms of the agreement if the development companies do not abide to their commitments to the Willets point community there will be a 35 million dollar fine and the city has the right to replace them with another developer.

Residents of the Queens Housing Coalition had many questions about the cost of the affordable housing options but they remained confident that their efforts helped to hold the developers accountable to the community members and workers of the Willets Point area.

For more information about the redevelopment of the Willets Point area please click here.