CMS and the QHC Gear Up For a New Housing Action 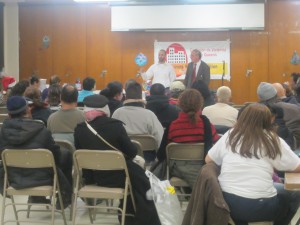 On Wednesday December 18th CMS and the Queens Housing Coalition gathered at St. Sebastian parish in Woodside,Queens. At the meeting members learned about the Queens Legal Aid Society office and other groups’ desire to get New York City government to take control of NYC’s rent laws.

Legal Aid Society Staff Attorney Kenneth Schaefer began his rousing call to action with a brief summary of housing policies which dictate NYC tenant protections. Kenny Minaya, CMS’ Staff Attorney, spiritedly translated and paraphrased the complex policies to the diverse audience. The Urstadt Law of 1971 prevents the people of NYC from passing stronger tenant protections.Currently more than half of all tenants in the city including middle class incomes are paying above the federal hardship level of 30% of income going for rent. The Legal Aid Society in partnership with other groups is demanding the restoration of NYC’s ability to pass stronger rent and eviction protections. The basis of this demand is that self government is recognized as a fundamental human right all around the world.NYC should have autonomy in creating rent laws. As homeless rates increase and rent continue to rise hundred and thousands of apartments are going to market which means landlords can charge what they want and tenants rights are limited.

The call to action will focus on bringing together organizations and community groups to lead a campaign to have our elected officials change the rent laws which are expiring and coming up for renewal in June 2015. 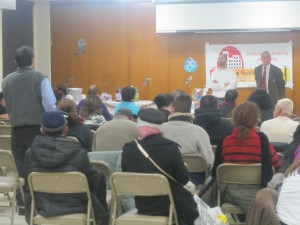 A member of the QHC comments on the housing crisis in NYC.

Members were enthusiastic about a possible partnership with the Queens Legal Aid Society and other groups in this bid to give NYC the power to pass stronger housing laws. They acknowledged the relationship between the housing crisis and the weak job market and even weaker economy.

After this informational presentation members celebrated the last QHC meeting of 2013. There were reflections of the past year especially highlighting the victories at Willets Point and there were discussions about the future meetings and movement of the organization.