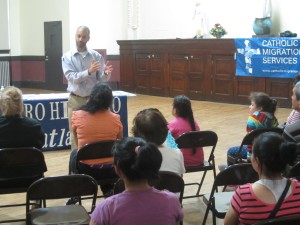 Kenny answers a members questions about her rights as a tenant.

On Tuesday May 27th CMS’ Staff Attorney Kenny Minaya and Community Outreach Coordinator Virginia Thomas attended an information meeting for Centro Hispano Cuzcatlan members. During the meeting civil rights and criminal defense attorney Nasreeen F. Syed spoke about the impact of criminal records on immigration processes. Kenny informed members about their rights as tenants and what to expect if they are required to go to housing court.

The meeting was led by former Queens Housing Coalition Coordinator Ivan Contreras and Centro Hispano Cuzcatlan staff member Fabiola Arripre. Nasreen emphasized that any contact with the criminal justice system should be taken seriously and requires competent representation as a criminal case and as an immigration case as a result of the complication that may arise. Nasreen also informed members that when they are interacting with the police they have a right to remain silent, record police activity and request to speak with an attorney.

Kenny Minaya spoke about the importance of storing rent receipts for at least 6 years as evidence in the case of a non-payment claim. He demystified the process of making a housing court appearance and he informed members of the importance of consulting an attorney before going to a housing court appointment. Kenny encouraged tenants to reach out to CMS for a free housing consultation with the housing attorneys if they are experiencing housing issues. Kenny notified members of the upcoming New York City Rent Guidelines Board meeting on June 19th in Queens Borough Hall. He energized the members by informing them that if they wanted to prevent excessive rent increases in the coming years they should vocalize their opinion during the public testimony on June 19th.

This was the second meeting of the year for the Centro Hispano Cuzcatlan members. The next meeting will be on June 24th at The Blessed Virgin Mary Parish.