On Saturday October 5th CMS marched across the Brooklyn Bridge for humane and dignified immigration reform alongside hundreds of people on what organizers called a “National Day of Immigrant Dignity and Respect.” Nationwide thousands of supports marched to draw attention to the government passing much needed immigration reform that treats immigrants with dignity and respect and which would serve to unify families.

CMS staff began the day at St. Leo’s church in Corona, Queens where they participated in an 8:00 a.m. mass. The topic of the homily was rooted in the universal and ancient history of migration. The priest emphasized the Church’s support for equality for all and he emphasized that everyone in American should have the same opportunities. After the mass parishioners gathered for an immigration forum where people were encouraged to speak about their own immigration stories or reflect on how immigration has impacted their families or their communities. The central premise of the forum highlighted the fractures within families that have been created because of the stall in progressive immigration reform. Some participants spoke about their personal difficulties accessing basic benefits because their parents are undocumented even though they themselves are documented. 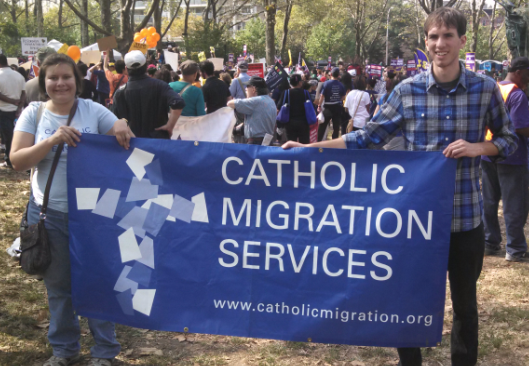 Rebecca and Benjamin representing CMS at a rally before the march across the Brooklyn Bridge.

After the forum CMS staff alongside Faith in New York marched from the church to Corona Plaza where they boarded buses that would take them to Cadman Plaza in downtown Brooklyn. Once there our staff members were joined by hundreds of organizations and participants.