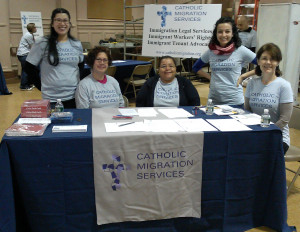 On Sunday April 21, Catholic Migration Services (CMS) and Catholic Charities Brooklyn and Queens (CCBQ) joined forces at Our Lady of Solace in Coney Island to bring their services to the neighborhood’s immigrant communities, who were hard-hit by Superstorm Sandy last October.

Parishioners and community members from Coney Island were invited after Mass to the parish auditorium to receive access to important information and services. CMS provided free immigration consultations, and its housing and labor attorneys were on hand to offer legal advice on landlord-tenant issues and workers’ rights, respectively. CCBQ connected attendees with a range of disaster assistance services, such as case management, job training and placement, and emergency assistance programs. Faith in New York (formerly Queens Congregations United for Action) registered those whose homes were flooded during Sandy for the city’s free mold removal program, Neighborhood Revitalization NYC, and also documented the challenges that people continue to face since Superstorm Sandy. Fidelis Care of New York conducted eligibility prescreenings for their free and low-cost health insurance programs. 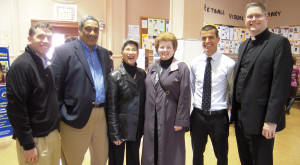 The goal of this new collaboration is to provide residents of Brooklyn and Queens with easy and direct access to the Catholic agencies of the Diocese of Brooklyn that offer social services and immigration legal services. Given that immigrants—and particularly undocumented immigrants—often do not have the same access to disaster relief services as U.S. citizens, the partnership has focused on outreach to immigrant communities affected by Superstorm Sandy. CMS and CCBQ co-sponsored their first services forum in March at St. Mary Star of the Sea and St. Gertrude parish in Far Rockaway. 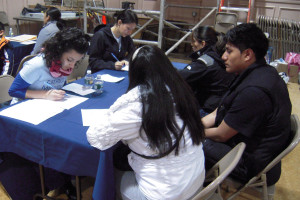 Two of the Diocese’s Ethnic Apostolates—Filipino and Mexican—participated in the forum. The Filipino community has a significant presence in the Diocese of Brooklyn, with Filipino masses given in at least twenty parishes throughout Brooklyn and Queens. One of those parishes is Guardian Angel in neighboring Sheepshead Bay, which was also severely impacted by Superstorm Sandy. “The event was a great manifestation of the Diocese of Brooklyn’s response to the challenge of ‘welcoming the stranger among us,’” says Filipino Apostolate Coordinator Father Patrick Longalong, referring to Matthew 25:35. “The opportunity to dialogue allows the various diocesan agencies … to channel and provide much needed assistance to often overlooked people in our community.” The Filipino Apostolate was represented by Hermes Allas and Romeo Rancio Enablek. 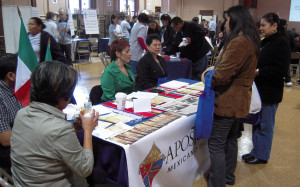