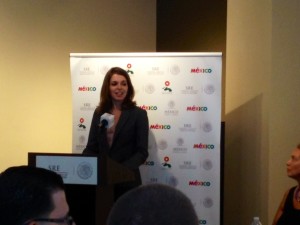 On August 21st, the Mexican Consulate hosted a press conference for their annual Labor Rights Week, taking place August 25th through August 29th. CMS Staff Attorney Alice Davis spoke about CMS’ Immigrant Workers’ Rights Program and its role in assisting low wage immigrant workers recover unpaid wages and report health and safety violations in their workplaces. The Immigrant Workers’ Rights Program was founded in 2010 in partnership with the Mexican Consulate and various state and federal agencies. It has since recovered over $400,000 through federal litigation, and complaints sent to the New York State and U.S. Departments of Labor.

Other speakers at the press conference included Ambassador Sandra Fuentes Berain, as well as representatives from the U.S. Department of Labor, the New York State Department of Labor, Occupational Safety and Health Administration, the New York City Comptroller’s Office, and the Equal Employment Opportunities Commission. The speakers emphasized that all workers have rights, regardless of their immigration status.