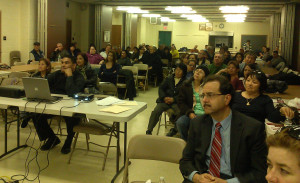 At its monthly meeting in Woodside on Tuesday evening, the Queens Housing Coalition discussed the latest developments in its campaign for affordable housing at Willets Point with community members. CMS, a member of the coalition, was there to provide information about our legal services and to answer immigration and housing legal questions.

Catholic Migration staffed a table at the meeting, where attendees could learn more about our legal services. Corrylee Drozda, an immigration counselor, answered attendees’ immigration questions and made referrals for appointments in our Sunnyside office. Kenny Minaya, CMS’ housing attorney, and Constantino Tejeda, a Center for Neighborhood Leadership Fellow, conducted a housing legal clinic for attendees with landlord/tenant issues. Working with Sanman Thapa of Chhaya CDC and Jo Rhee of the Minkwon Center for Community Action, Kenny and Constantino also helped tenants living in a building where the landlord will not make necessary repairs apply for rent reductions.

During the meeting, QHC Coordinator Ivan Contreras updated the coalition on the latest developments in the campaign for the more timely construction of affordable housing in the Willets Point redevelopment plan. The developers behind the plan, the Queens Development Group (QDG), recently announced that the affordable housing component will be delayed until 2025, much later than when was originally approved by City Council in 2008. 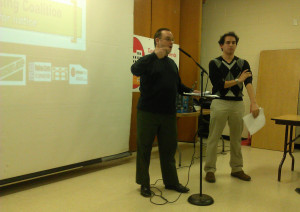 Robert LoScatzo, an independent journalist, and Ivan Contreras discuss the contract with the community

Contreras’ presentation focused on a March 21st article by Joe Orovic of the Queens Chronicle (in which Contreras is quoted), “Willets Point a coup for developers.” In the article, Orovic explains that the contract between the city and the Willets Point developers “is laced with clauses that would allow the QDG to back out of affordable housing promises.” When Jesse Masyr, an attorney representing the developers, addressed the Queens Housing Coalition in January, he explicitly stated that the developers was not allowed to construct affordable housing until the city builds additional exit ramps off the Van Wyck Expressway at Willets Point. However, Orovic reveals, the contract grants the developers complete control over when the ramps are built. This directly contradicts Masyr’s statements to the QHC: “If [the city] builds exits off the Van Wyck three years earlier, we will construct housing three years earlier.” According to Contreras, this means that there is no guarantee that the developers will ever construct affordable housing at Willets Point.

The community has been engaging with local elected officials to achieve the campaign’s goal of a more timely construction of affordable housing at Willets Point. State Senator Jose Peralta–who represents Corona, Elmhurst, East Elmhurst, Jackson Heights, and Woodside–was slated to speak at the meeting, but was called away to Albany at the last minute. However, his Director of Communications, Frank Sobrino, conveyed two promises from Senator Peralta to the community: to broker a meeting with the city Economic Development Corporation and the state Department of Transportation to discuss the issue of the Van Wyck Ramps, and to attend the April QHC meeting. Last November, City Council Member Julissa Ferreras–who represents Corona, Elmhurst, East Elmhurst, and Jackson Heights–attended a QHC meeting and pledged to stand with the community on building affordable housing in a timely manner at Willets Point.

Click here to see the Queens Tribune’s coverage of this meeting!