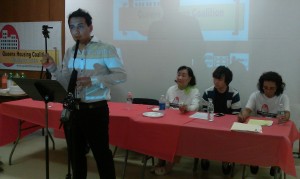 On Tuesday evening, the Queens Housing Coalition hosted a press conference in response to Queens Community Board 7’s vote to approve the Willets Point redevelopment plan on May 13 (learn more here).

At the press conference, held at St. Sebastian’s in Woodside, QHC Coordinator Ivan Contreras shared the Queens Housing Coalition’s opinion of CB 7’s decision to approve the plan, which currently does not legally oblige either the City or the developers to develop affordable housing at Willets Point: “the ‘Yes’ vote does not reflect the true needs and opinions of Queens residents, especially those who live and/or work by the planned redevelopment site.”

When the original proposal for redeveloping Willets Point was approved by City Council in 2008, it included a provision that 35% of any housing developed would be affordable, which would greatly benefit the surrounding immigrant communities of Jackson Heights, Corona, Flushing, and Woodside. However, with the announcement of Related and Sterling Equities’ joint plan to first build the city’s largest shopping mall in Willets Point, the affordable housing component of the redevelopment plan has been delayed until 2025.

However, in March, an article in the Queens Chronicle by Joe Orovic revealed that the contract between the developers and the NYC Economic Development Corporation does not legally obligate either the City or the developers to build affordable housing as part of the larger redevelopment of Willets Point. Therefore, as the proposal stands, there are no guarantees that affordable housing in Willets Point will ever become a reality or that this redevelopment will bring any benefits to Queens residents.

At the press conference, Contreras argued: “The community faces the very real possibility of being left with yet another large mall in Queens—in which current neighborhood stores are already struggling due to the economic lull—and none of the affordable housing that was promised.” Contreras explained that it is critical for the community to engage elected officials in order for the campaign to be effective–namely, Council Member Julissa Ferreras, whose district includes Willets Point and who has the power to bring the plan to a vote before City Council. In a final call to action, he stated: “The Queens Housing Coalition calls on the NYC Economic Development Corporation and the developers, Sterling Equities and Related Cos, to redevelop Willets Point responsibly by legally committing to developing the affordable housing promised to the community.” 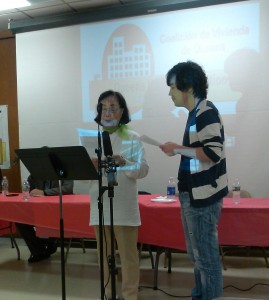 Following Contreras, Adrian Bordoni, Executive Director of Woodside on the Move (also a member of the QHC), spoke on next steps in the campaign for affordable housing at Willets Point. “We need everyone to speak on the need for affordable housing,” Bordoni said, emphasizing the need for the community to engage Mayor Bloomberg and elected officials.

Lauren Springer, a QHC tenant leader and Sunnyside resident, argued that, in many cases, the promise of affordable housing is nothing more “a carrot dangled in front of us” by developers, only to be taken away once their projects receive community approval.

Finally, the press heard from Grace, a Korean immigrant residing in Corona, Queens. Speaking through a translator from the Minkwon Center for Community Action (a QHC member), Grace stated that the “Community Board 7 vote does not represent the voices of low-income tenants.” Given the millions of dollars subsidies that the developers will receive from the city financed by taxpayer dollars, she argued, the developers must be held accountable on their promise of affordable housing to the community. 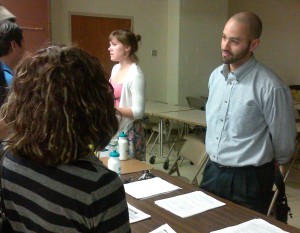 The press conference received some great coverage from local media:

Click here to read coverage from the Queens Tribune!