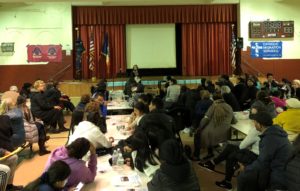 On Thursday, April 12th right to counsel coalition members, tenants, and community leaders gathered for a Town Hall Forum in the gymnasium of St. Bartholomew Catholic Academy in Elmhurst, New York to address legislation signed into law on August 11, 2017. Right to Counsel mandates universal access to legal representation for low-income tenants in New York City and is the first City in the nation to establish this type of legislation.

Coalition members, tenants, and community leaders highlighted the history of Intro 214 and its amendments originally introduced in March of 2014 by Council Members Mark Levine and Vanessa Gibson. Approximately 150 Queens tenants packed the school gymnasium to learn why the Right to Counsel is so important, the eligibility requirements, how to find an attorney, which Queens zip codes will begin implementing RTC, and how to build tenant power. 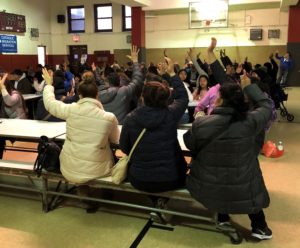 After learning that 11433, 11434, and 11373 are the first Queens zip codes to implement RTC, tenants later broke out into small groups facilitated by attorneys and organizers for an opportunity to ask questions, discuss ways to protect themselves and their neighbors, and to complete commitment cards asking tenants to start taking action and ownership of this new tool.

Intro 214-B, the final bill that passed last year, ensures at the end of 5 years, all income eligible tenants will be ensured an attorney when fighting their eviction in housing court. Tenants who are over income, have the right to a consultation with an attorney. The bill also provides for NYCHA tenants whose cases happen in administrative hearings, to have representation as well.

The Right to Counsel NYC Coalition is made up of tenant organizing groups, tenant advocates, homeless advocates, senior advocates, disability advocates, academics, legal services organizations and more! We led the campaign that resulted in the passage of Local Law 136, which ensures that low-income tenants are represented in eviction cases by attorneys when they defend their rights and their homes. The Coalition is actively organizing and advocating while this law is being phased in.