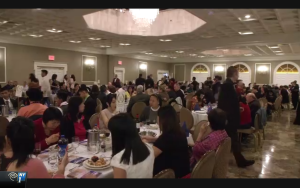 Honorees for the 2016 Shining Star Awards and their guests

Individuals from the immigrant community of the Diocese of Brooklyn are honored for serving their ethnic ministries at the 2016 Shining Star Awards. 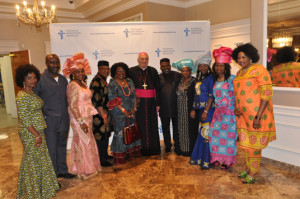 Members of the Ministry to Nigerian immigrants with Most Rev. Nicholas DiMarzio, Bishop of Brooklyn.

Catholic Migration Services conducted two dinners on successive Fridays to honor the recipients of this year’s Shining Star Awards presented to parishioners of the diocese’s ethnic ministries for their service to the Church in Brooklyn and Queens. 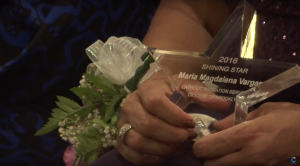 Shining Star Award for Maria Magdalena Vargas, member of the ministry to immigrants from the Dominican Republic.

For nearly half a century, Catholic Migration Services has been helping immigrants settle in the Diocese of Brooklyn. The organization is honoring them with a “Shining Star” award, calling the immigrants beacons of hope for the world. Michelle Powers attended the annual dinner celebration and filed this report.