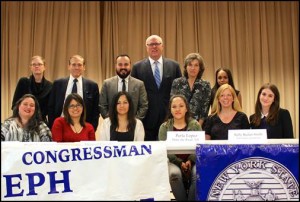 Last Friday February 20th, The National Association of Latino Elected Officials (NALEO) and Univision 41 brought together a panel of attorneys and immigration experts to address over 300 community members at the Casita Maria Cultural Center in the Bronx. The panel focused on updates surrounding the executive action programs announced by President Obama in November of last year.

The panel spoke to inform and update community members of all the legal services available to them and their families interested in applying for an immigration status. President Obama’s proposed plan to expand Deferred Action for Childhood Arrivals (DACA) and introduce Deferred Action for Parents of Americans and Lawful Permanent Residents (DAPA) would provide work authorization to and safeguard millions of undocumented immigrants from deportation. The more informed the community is of available services from licensed attorneys, the less likely they will be to fall victim to “notarios” or people not qualified to provide immigration legal services.

CMS and other organizations provided information on their services and hotlines to provide further information on the President’s executive action programs. The overwhelming interest further demonstrated the need for a more comprehensive solution to the existing immigration system and for the growing need for trustworthy legal service providers.