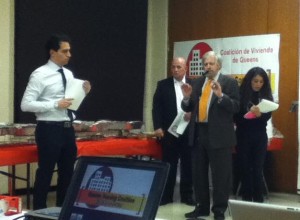 On Tuesday night, 200 Queens residents packed St. Sebastian’s Parish Center in Woodside for the Queens Housing Coalition’s meeting with Related and Sterling Equities, developers of the controversial plan for Willets Point. CMS, a member of the coalition, was there to provide information about our legal services and to answer attendees’ immigration and housing legal questions.

The meeting opened with a few words from Ivan Contreras of the Queens Housing Coalition and Catholic Migration Services: “Tonight we are going to learn about the Willets Point redevelopment project from the developers themselves, not only in English…but in our own languages. We will finally understand how this project could impact our lives, our families, our neighbors, and our communities.”

The presentation–translated simultaneously into Spanish and Korean–was given by Ethan Goodman, an attorney for Sterling and Related Equities.  Entitled “Willets Point: An Expanded Vision,” the five-fold plan consists of:

The fifth phase of the plan was pushed back to 2025, much later than originally planned and approved by the City Council in 2008. Since the delay was announced, the Queens Housing Coalition has been campaigning to ensure that the promise of affordable housing–so desperately needed in Willets Point and the surrounding immigrant communities of Jackson Heights, Elmhurst, Corona, Flushing, and Woodside–is not lost to more profitable commercial development.

Coalition and community members posed a number of questions and concerns about the plan to Jesse Masyr, another attorney for Related and Sterling Equities. Speaking through a Korean translator, Flushing resident Ky J. Kim, expressed concern for seniors in need of affordable housing and doubted if he would live to see affordable housing constructed in Willets Point.

Queens resident Dania Joaquin asked why the developers couldn’t start building affordable housing before the Willets West mall, to applause from the audience. Masyr replied that the developers could build housing before the mall and the hotel, but that there would be no services or infrastructure, such as schools, available to the people living in them. He also explained that, under their current agreement with the city, housing cannot be built until the city completes the new ramps for the Van Wyck Expressway, scheduled for 2024. “We will build housing as soon as the city builds the ramps,” he said. 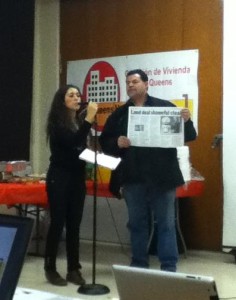 Marco Neira, a founder of the Committee for the Defense of Willets Point, a group of business owners and workers in the neighborhood, raised concerns about the impact the plan will have on businesses in Willets Point, which is home to many immigrant-owned auto body shops. “What is going to happen to us when the building starts?” he asked. “We won’t get the jobs because we are undocumented.”

“I think the man knows the answer to his question,” Masyr replied, explaining curtly that the city is working with Willets Point businesses on a relocation plan.

The meeting gave Queens residents an opportunity to learn more about the controversial plan for Willets Point and to voice their questions and concerns to the developers themselves. The lively discussion lasted nearly two hours, with more questions from the community than could be addressed in the time alloted. “It’s a good thing to have this conversation,” Masyr stated, opening the door for more community meetings about the plan: “It won’t be the last time we talk about this project.” The Queens Housing Coalition will continue this conversation with Related and Sterling Equities to push for more timely construction of affordable housing in Willets Point .

Learn more about this meeting in articles from the Queens Chronicle, the Queens Latino  (translated into English by Voices of NY), and the TimesLedger.