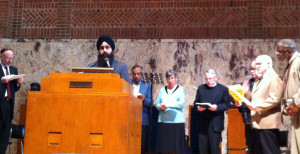 On Friday, faith community and congressional leaders met for a press conference at The Community Church of New York to promote just and human comprehensive immigration reform (CIR). The press conference was organized by the New York State Interfaith Network and was co-sponsored by several community organizations from diverse cultural and faith backgrounds in New York. The press conference opened with a participatory, interfaith prayer representing Buddhist, Christian, Hindu, Jewish, Muslim and Sikh faith traditions. Catholic Migration attended the press conference to demonstrate our support for CIR on behalf of the immigrant communities in Brooklyn and Queens we serve.

Three young people, whose lives have been affected by a broken immigration system, shared their stories of extreme hardship and family separation. Maggie, a young woman born in the United States who works with the Arab American Association of New York, told her story of her father’s deportation when she was young. Her family attempted moving to Jordan, but after four months of struggling with the language and very different way of life, they moved back. She and her family have been separated from their father for the past eight years.

Luz, a prominent community leader in Queens and Queens Congregations United for Action staff member, bravely shared how she was unable to attend her mother’s funeral in Ecuador two years ago. Monsignor Kevin Sullivan, Executive Director of Catholic Charities of the Archdiocese of New York reflected on these stories by saying, “The separation of families does not foster human dignity.”

With the congressional recess that week, elected officials had the chance to reach out to constituents in their districts. On Friday, champions of immigration reform showed their support. Congresswoman Nydia Vasquez spoke with an uplifting tone saying, “I know it has been a long journey (towards CIR). People of this country, Republicans and Democrats alike, spoke this past election that it is an important issue.” Also speaking, Congresswoman from Brooklyn Yvette Clarke said: “We must open our eyes to recognize we have become more robust, diverse” as a country. As a faith community, Nydia Vasquez highlighted the need for continued civic engagement and our “moral obligation to make our voices heard and call for justice.” Congressman Joseph Crowley highlighted the economic need for immigration reform, “We need to keep our economy going by bringing the best, brightest and bravest.”

Chung-Wha Hong, Executive Director of the New York Immigration Coalition, concluded the event by announcing a mass mobilization which will take place in Washington D.C. on April 10. This is a critical date because it is anticipated that shortly after, the Senate will introduce a CIR bill.