CMS Connects with Parishioners During a Mass for Immigration Reform 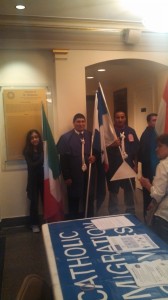 On Saturday May 31st Outreach Assistant Rebecca Rybaltowksi spoke to parishioners during and after the Spanish language Mass supporting immigration reform. This event was organized by El Senor de los Milagros prayer group. Approximately 100 people who attended the Mass were able to hear about CMS’ free legal services and programs . After the Mass parishioners made inquires about the processes that they could use to bring family members to the United States. Family reunification was a major theme in parishioners’ questions a theme that is also present in the call for immigration reform.