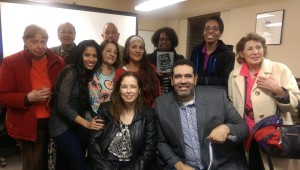 The board, comprised of nine members, held multiple public hearings throughout the City of New York in anticipation of their final vote on June 27th where they passed the second straight rent freeze in their 46-year existence. A historical achievement that affects 1.6 million rent stabilized tenants; the 7-2 vote approved a 0% increase on one-year leases and a 2% increase on two-year leases signed between October 1, 2016 and September 30, 2017.

Serving as borough head for Queens, Catholic Migration Services prepared for the public hearings mobilizing tenants among the groups from the Rent Justice Coalition representing Queens County. During this time tenants testified before the Rent Guidelines Board sharing personal experiences and expressing why a rent increase was not putting the most vulnerable New Yorkers first. Lorena Lopez, a tenant organizer with Catholic Migration Services was pleased with the vote and honored that the organization was recognized in the fight to advocate on behalf of tenants in the borough but also shared the work doesn’t end here. “We believe the tenants deserve a rent rollback and although this is a celebration for the tenants, organizers, attorneys and members the reality is several seats on the Rent Guidelines Board will become vacant by the end of this year.  That means the work of the coalition is to re-educate its new members,” explained Lopez.

After a recent suit filed by the Rent Stabilization Association (RSA) against the Rent Guidelines Board, advocating on behalf of tenants will continue to encounter hurdles. Lopez fears the new board will act more conservatively when making decisions that could benefit tenants since the RSA represents 25,000 landlords of one million rent stabilized apartments in the five boroughs. Until then the New York City Rent Freeze, a success for over 1 million New Yorkers, mainly comprised of low-income families, senior citizens and the disabled went into effect October 1st. This affects residents who rent an apartment that is rent regulated (rent controlled, rent stabilized, hotel stabilized or Mitchell-Lama).