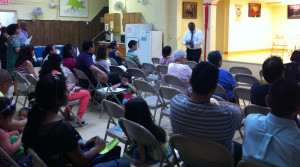 Immigration reform has been all over the news for the past few months. While the possibilityof immigration reform has generated much hope and excitement for immigrant communities across the nation, it has also been a source of widespread confusion and, unfortunately, fraud by notarios. To help its parishioners and the larger community separate the facts from fiction, Our Lady of the Angelus in Rego Park hosted a forum about immigration reform with Catholic Migration Services. 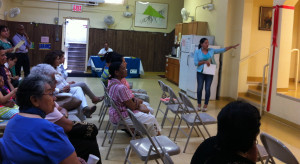 Another Community Services Group volunteer then shared her experience attending the Senate hearing in Washington, D.C. in which the committee agreed to pass the immigration reform bill to the Senate floor for a vote. Finally, Megan Helbling, immigration counselor at Catholic Migration Services, discussed forms of immigration relief people may be eligible for now, since immigration reform has not yet passed into law. She talked about Deferred Action for Childhood Arrivals (DACA), a policy passed in 2012 for undocumented young people who arrived in the U.S. as children, as well as immigration benefits for victims of serious crimes, abuse or extreme cruelty.

For more information, or if you would like to apply for any of these immigration benefits, please make an appointment to meet with an immigration counselor at our Brooklyn office (718-236-3000) or Queens office (347-472-3500).