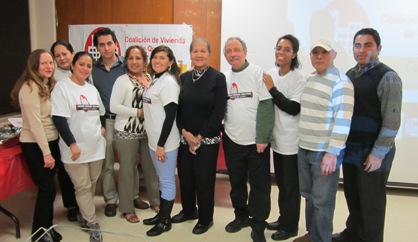 Approximately 80 Queens tenants gathered for the Queens Housing Coalition’s monthly meeting on Tuesday night with the Queens Smoke-Free Partnership and the Real Rent Reform (R3) Campaign. CMS, a member of the coalition, was there to provide information about our legal services and to answer immigration and housing legal questions.

The meeting began with a presentation by Isabel Rodriguez of the Queens Smoke-Free Partnership and Michelle Liu of the Chinese-American Planning Council about the benefits of smoke-free housing. They pointed out that, given that over 60% of people in NYC living below the poverty line are exposed to secondhand smoke, creating smoke-free housing is a social justice issue. They discussed the benefits of making apartment buildings smoke-free, such as decreasing the risk of asthma to children and other non-smokers. 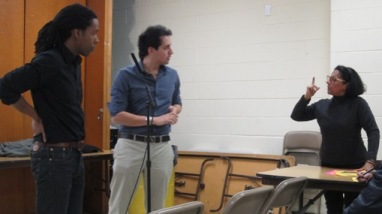 Jaron Benjamin of the Metropolitan Council on Housing then addressed the Coalition, describing the negative influence that the wealthy and powerful real estate lobby has on tenants in Queens and throughout New York City. He invited everybody to participate in the R3 Campaign, a citywide coalition that fights for pro-tenant legislation, and to attend their next meeting on Monday, February 25 at 6:30pm to discuss the role of campaign finance in housing policy.

Finally, Jo Rhee of the Minkwon Center for Community Action (a QHC member) provided the Coalition with an update on immigration reform. She distributed postcards to attendees that will be sent to U.S. Senator Charles Schumer of New York asking him to push for real immigration reform that will benefit the 11 million undocumented immigrants living in the U.S.

Catholic Migration manned a table at the meeting, where attendees could learn more about our legal services. Megan Helbling, an immigration counselor, answered attendees’ immigration questions and made referrals for appointments in our Sunnyside office. Kenny Minaya, CMS’ housing attorney, and Constantino Tejeda, a Center for Neighborhood Leadership Fellow, conducted a housing legal clinic for attendees with landlord/tenant issues.