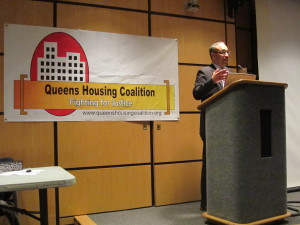 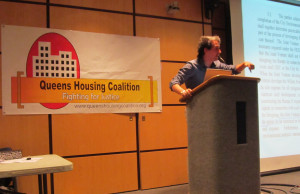 The meeting began with a presentation by Ivan Contreras, who updated the audience on the latest updates on the campaign. He highlighted a recent article (in which Contreras is quoted) by Joe Orovic of the Queens Chronicle, who revealed that the contract between the New York City Economic Development Corporation (EDC) and the Willets Point developers, Related and Sterling Equities, does not legally obligate either the City or the developers to build affordable housing as part of the larger redevelopment plan for Willets Point. Contreras warns that, if no action is taken to hold the City and the developers accountable for their promise to build affordable housing, the plan will simply be  “a mall and hotel project,” with no benefits for the community. He described some of the QHC’s next steps in the campaign, including meeting with Queens Borough President Helen Marshall, who has the power to convene a hearing about the plan, and working with Council Member Julissa Ferreras, whose district includes Willets Point, on getting City Council involved. 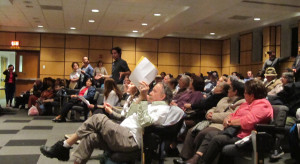 Following Contreras’ presentation, Senator Peralta addressed the community. He began by stating that, during their presentation to the Queens Housing Coalition in January (learn more here), the developers lied when they claimed that Senator Peralta supported their redevelopment plan. He explained that he was only in favor of the plan when affordable housing was part of the conversation. “I am not supporting this project unless it includes affordable housing,” Senator Peralta declared. “End of story.” He pledged to meet with the QHC and Council Member Ferreras in the near future to ensure that the redevelopment plan addresses community needs, as well as to attend the rally that the QHC plans to stage at Willets Point (date to be announced).