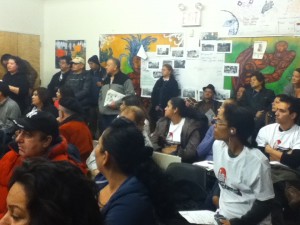 The meeting, hosted by the Fairness Coalition at Make the Road NY in Jackson Heights, was convened to discuss the Bloomberg administration’s plan for a new mall at Willets Point and for new tennis and soccer stadiums in Flushing Meadows Corona Park. Approximately 50 community members attended, including several tenant leaders from the Queens Housing Coalition, as well as Council Member Julissa Ferreras and NYS Senator Jose Peralta. NYS Assemblymember Francisco Moya was also slated to participate, but did not attend.

The meeting began with a brief presentation by Asian Americans for Equality, a member of the Queens Housing Coalition, on the basics of each plan. After the presentation, Councilmember Ferreras and Senator Peralta addressed the community, sharing their perspective on the plans. 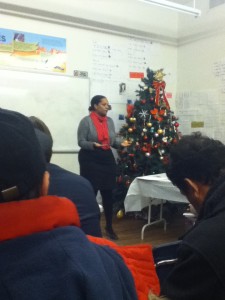 Councilmember Ferreras explained that, with regard to the plan for a new tennis and soccer stadiums, she would give her support only if the United States Tennis Association (USTA) and Major League Soccer (MLS) replace all the green space they develop in Flushing Meadows Corona Park in the community. She argued that, with a conservancy, the park would be in a stronger position because a conservancy would provide control over the park’s revenue. With regard to the plan for a new mall in Willets Point, Council Member Ferreras expressed her dismay that the plan’s affordable housing component has been delayed until 2025. She declared that housing is the first priority both for her and the communities in her district–Corona, Elmhurst, and parts of Jackson Heights. She is also concerned about the economic impact that the new mall–which, if built, will be the largest shopping center in Queens–will have on small businesses on Roosevelt Avenue.

Senator Peralta–whose district includes Corona, East Elmhurst, Elmhurst, Jackson Heights, and Woodside–explained that he has not had any communication with either the USTA or the Willets Point mall developers, and therefore cannot take a position on either plan until his questions are answered. He declared his support for the plan to build a soccer stadium in Flushing Meadows Corona Park on the condition that MLS replace all of the green space it develops in the community, arguing that the stadium is “viable and positive.” 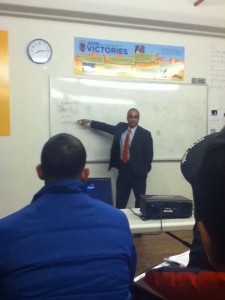 Senator Peralta discusses his view on the plans for Willets Point and Flushing Meadows Corona Park.

Following Council Member Ferreras and Senator Peralta’s presentations, the audience had the opportunity to ask them questions. Among the issues raised were how public transit will be impacted by increased ridership from the new tennis and soccer stadiums and how the elected officials take community viewpoints into consideration when taking a position on these plans.