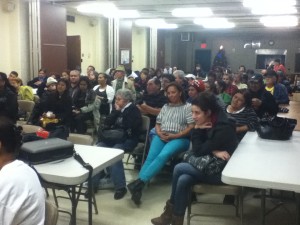 On Tuesday night, the Queens Housing Coalition/CMS hosted its final monthly meeting of the year, followed by a holiday party. CMS, a member of the coalition, was on hand to provide information about our legal services and to answer attendees’ immigration and housing legal questions.

The meeting began with a discussion of QHC/CMS’ biggest campaign, the fight for affordable housing in the Willets Point redevelopment plan (learn more here). QHC coordinator Ivan Contreras updated the coalition about his meeting with the Willets Point plan developers, Related and Sterling Equities. The developers were receptive to concerns raised about the need affordable housing in Willets Point, and expressed willingness to attend a future Queens Housing Coalition meeting to discuss the plan with the community. 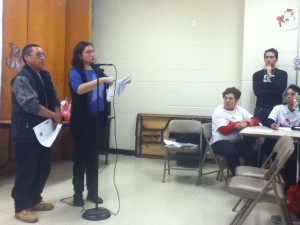 Following Ivan’s update, two representatives from New Immigrant Community Empowerment (NICE) conducted a “Know Your Rights” workshop. NICE engages in community organizing, advocacy, and educational campaigns for immigrant and workers’ rights. NICE recently released a study that illustrated the fraudulent practices of many legal services providers and employment agencies along Roosevelt Avenue, “Dreams and Schemes.” The representatives created a dialogue about what immigrants’ rights as consumers are, including the right to quality services, the right to have services performed by vendors with appropriate licenses/permits, and the right to a receipt or contract for services received. They also recreated a scene from a graphic novel produced by NICE about notarios that deceive immigrants that come to them for help obtaining legal immigration status, asking the audience to identify instances of fraud. 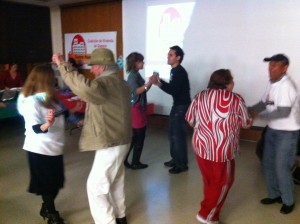 After the meeting ended, everybody enjoyed a party to celebrate Christmas and the end of the year. QHC’s Food Committee prepared a delicious Christmas dinner, and attendees spent the evening dancing and enjoying each other’s company.