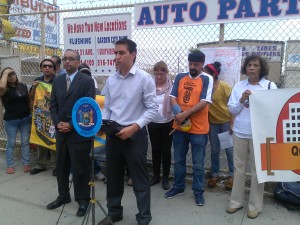 On Thursday afternoon, State Senator Jose Peralta (D-Corona, Elmhurst, Jackson Heights), the Queens Housing Coalition, and Make the Road NY gathered in front of an auto body shop across from Citi Field to release a joint statement on affordable housing in the Willets Point redevelopment plan. 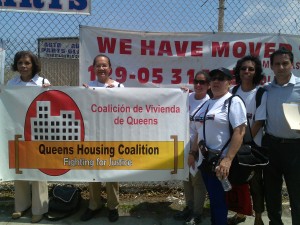 Ivan Contreras, QHC coordinator, spoke on the contract for Willets Point between the developers–Sterling Equities and Related Companies–and the NYC Economic Development Corporation.  He explained that the contract provides legal guarantees only for a shopping mall and parking lot at Willets Point–not affordable housing, which he argued is the only real benefit the community will receive from the plan. “Affordable housing is not a luxury,” Contreras stated. “It’s a reality, and we need it now.”

Maria, a member of Make the Road NY, addressed the press in Spanish through a translator. She discussed the need for good jobs in the communities surrounding Willets Point–not the part-time and temporary work that would come with a new shopping mall.

Senator Peralta also sent a letter outlining to Mayor Bloomberg, City Council Speaker Christine Quinn, and Queens Borough President Helen Marshall, but has yet to receive a response from any of these elected officials.

Following the press conference, attendees joined together chanting, first in English and then in Spanish: “What do we want?” “Affordable housing!”

The press conference was covered by several local media outlets: